Before the occupation of the Thai peoples.

After the occupation of the Thai peoples.

The Dvaravadi Empire lay on the territory of what is now central Thailand. Its capital is believed to be in the area of the provinces of Nakhon Pathom and Amphoe U – Thong, Supanburi province. The majority of its population were the Mons.

In the first phase the art in Dvaravadi was influenced by the Indian Gupta and Post – Gupta styles (4-6 centuries), while in the later phase this art showed the traits of the influence of the Khmer.

Sculptures from the Dvaravadi period are mainly Buddha – statues made of stones, terracotta, stucco and bronze. Influenced by the Gupta and Post-Gupta in the 7th century. Buddha statues are characterized by graceful bodies, broad shoulders and narrow waists in transparent and draped cloister robes.

The works from the second phase represent natural elements that can be recognized by the lotus ring as a shine of light on the head of Buddha, the large frizzles of hair, the broad face, the curved interconnected eyebrows, protruding eyes and the rather low nose as well the plump lips.

The Buddha statues in the latter phase, influenced by khmer , are characterized by the square shape of the face with a dimple on the chin; the robe on the left shoulder hangs in a straight line.

Other sculptures of Dvaravadi art are the wheel of life made of stone in terracotta and stucco, the motifs of which represent Buddha statues, the Bodhisatt (Buddha from Hinayana Buddhism) or animals.

The following important buildings of the Dvaravadi style can be found in Thailand:

In the city of Chaiya and its surroundings, some stone sculptures – mostly Bodhisatt figures – were found, as Mahayana Buddhism was very widespread during this time. In addition, bronze figures of Bodhisatt were found in this area, allegedly from the 8th or 9th century.

Buddha statues from Srivichai can be found in smaller numbers. The most important Buddha figure under a Naga from this period can be found in Wat Hua Wieng. Its origin is likely to be traced back to the High Srivichai period, i.e. around 1183. Evidence for the influence of the Khmer are the Naga heads and the sitting position of the Buddha statue.

Most important is the 8th century moment Phra Borommathat ChaiYa, which can be compared to Borobudur in Java, Indonesia.


It is said that the Khmer culture ruled the northeast, east and central Thailand during this period, with influences from both Mahayana and Theravad Buddhism and Hinduism being later. However, Mahayana Buddhism was the most popular.

Numerous stone statues have been discovered showing the Buddha in a meditating position under the protection of the Naga. These Buddha statues with a square face and straight eyebrows were lightly decorated according to the Khmer tradition.

In addition to statues of Buddha, some Bodhisatt and Hindu gods were also found. The statues were usually made of stone rather than bronze.

Religious monuments in the form of Prang or Prasart are representative of the architecture of Loburi. The famous monuments are: Phrasart Muang Tam in the province of Buriram from the time of King Suriyavarman I (1002-1050), Phrasart Panomrung, in the district of Nang Rong, Burirum.

Phra Prang Sam Yod in Lopburi Province was created during the time of King Jayavarman VII, the last important king of the Khmer Empire.


During this period the Thai people founded their empire in what is now northern Thailand. The Chiang Saen art or the Lan Na art can therefore be regarded as the first real Thai art.

Known for sculptures from this time are Buddha statues of the Theravad direction, which can be divided into two groups.

During this period, many small statues of Buddha and reliquary shrines were made from precious stones or beautiful crystals. It is believed that the Emerald Buddha in Bangkok was probably created during this time by an artist from northern Thailand.

Since King Mengrai founded his empire in Chiangmai in 1296, the architecture has shown more and more influences from the Sukhothai style. The Stupa were bell-shaped on a steep and rectangular plan, but this style probably originated in Ceylon (or Sukhothai). However, not only the art from Sukhothai, but also other influences from Srivichai, Dvaravadi and Burmese art were noticeable.


The Sukhothai period, often referred to as the most brilliant era for Thai art, did not last very long. Sukhothai art, however, had developed a very peculiar style.

During this period, a new type of Buddha statue develops, which can be attached to the following characteristics: a halo over the head, smaller frizz, an oval face, overbrowed eyebrows, a long and narrow nose with a gentle, smiling expression of calm and compassion slim body with broad shoulders. The Buddha statues can usually be found in four positions, namely

The last position, the striding Buddha, was apparently very popular. It probably symbolized the development of the new independence of the Sukhothai Empire.

The pottery made during the Sukhothai period became known as “Sangkalok”. The Thais had learned this ceramic art from the Chinese and Khmer. Sangkalok ceramics had a wide variety of forms, ornaments such as dolls, Naga heads, gatekeeper figures, etc.

Stupa from the Sukhothai period are divided into two groups.

The prangs from this period showed the influence of Khmer art. But they are larger and are decorated with niches that contain Buddha images.

As a rule, Vihan are bigger than Bot. Some Vihan are shaped like Mondop, e.g. Vihan in Wat sri Chum in the old town of Sukhothai.


U-Thong art develops in the area of the Chaophraya River in central Thailand at the same time as Chieng Saen and Sukhothai art. It was a fine amalgamation of the Dvaravadi, lopburi and Sukhothai styles.

The older U-Thong art dated from the 12-13 centuries and showed a connection between Dvaravadi and Lopburi features. The Buddha statues from this period are very few in number.

Middle U Thong art was mainly influenced by the Khmer style.

The late U Thong art of the 14th and 15th centuries. The Khmer influence was replaced by the Sukhothai influence.

An example of U-Thong architecture is the PhraBorommathat in the province of Chainat. The fusion of the Srivichai and Sukhothai styles is evident in the Ceylonese area, surrounded by four Stupa at all four corners. Another example is the main fountain at Wat Phra Sri RattanaMahaThat in Lopburi Province.


Ayutthaya became the capital of the Thai kingdom in 1350 and remained the center of the country for 417 years.

Initially the Ayutthaya art followed the U-Thong school. In the 15th century, when King Boromma Trai Lokanart ascended the Tron, the influence of the Sukhothai school slowly penetrated Ayutthaya.

The real Ayutthaya art supposedly appeared only after this time. However, between the 17th and 18th centuries, after Thailand’s victory over Cambodia, Khmer art was also adopted and modified.

Ayutthaya Buddha images are characterized by the following features; an oval or square face, a flame-like halo and a highlighted hairline on the forehead. The robe hangs straight down from the shoulder to the pin. The stone statues often depict Buddha with double eyelids or sometimes with a thin mustache.

The architecture during the Ayutthaya period is divided into four phases;


After the Fall of Ayutthaya in 1767, Thonburi was made the new capital. But the Thonburi period lasted only 15 years. After that, Bangkok became the capital of Thailand. The Thai people tried to continue or to maintain the Ayutthaya culture.

Very few statues of Buddha were erected during the time of the first three kings of the Chakrie dynasty. Numerous bronze statues from the Sukhothai, U-Thong and Ayutthaya periods were brought to the temples in Bangkok from northern Thailand.

The Buddha statues erected at the beginning of the Rattanakosin period tended to mimic more or less the already decadent Ayutthaya art. The crowned Buddha was still popular, and the artists showed more interest in ornamentation than in the inner expression of the statues. 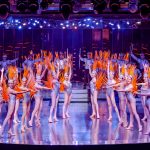 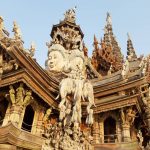